Damietta, 13 June 2021 – A women-friendly space was opened yesterday in Ezbet El Borg city in Damietta with the aim of creating a decent space for women and girls in the community. The space was designed and developed using a participatory and gender-responsive approach to empower women and girls through providing opportunities for economic empowerment while encouraging women’s leadership and participation in public life.The new space was renovated through a partnership between the National Council for Women, the Damietta Governorate, and UN Women Egypt, with the generous support of the Kingdom of the Netherlands. The opening was attended by Dr. Maya Morsy, President of the National Council for Women; Dr. Manal Awad, Damietta Governor; Ms. Christine Arab, UN Women Country Representative; H.E. Christian Berger, Ambassador of the European Union in Egypt and Mr. Wierish Ramsoekh, Chargé d'affaires of the Kingdom of the Netherlands in Egypt. 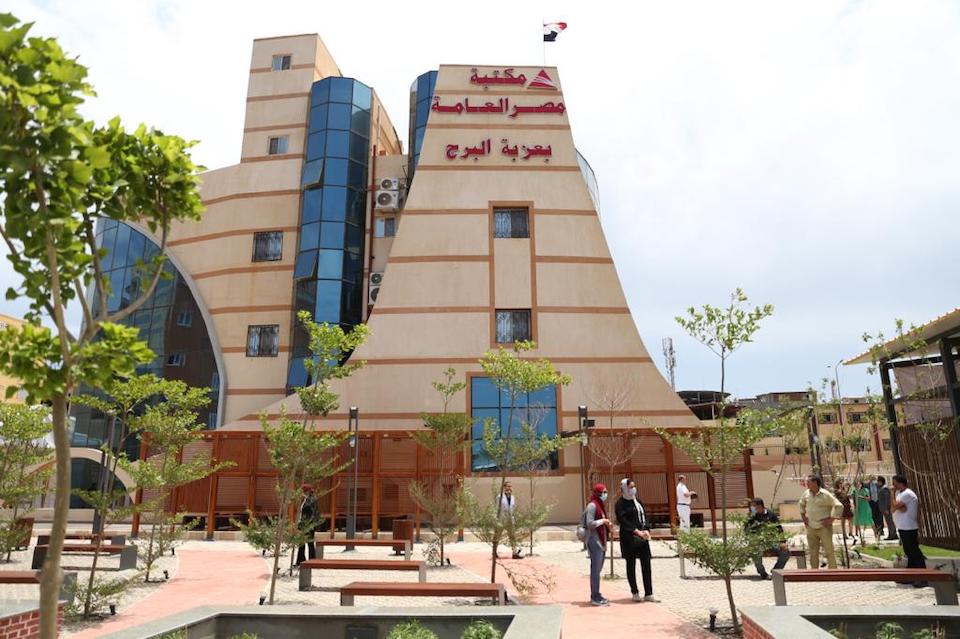 During the opening, Dr. Maya Morsy expressed her gratitude for participating at the opening of the women-friendly space n Damietta Governorate, praising the selection of Misr Public Library in Ezbet El-Borg for establishing a safe place for women in the governorate, noting that Misr Public Library is now highly developed, hygienic and organized, which will help women in Ezbet El-Borg to market their products through the permanent exhibition that will be established within this women-friendly space, in addition to providing a safe space for women. Dr. Maya Morsy also commended the role of the European Union, the Embassy of Netherlands, and UN Women in supporting Egypt’s efforts to empower Egyptian women, in line with the objectives of the National Strategy for the Empowerment of Egyptian Women, derived from Egypt’s Vision 2030. 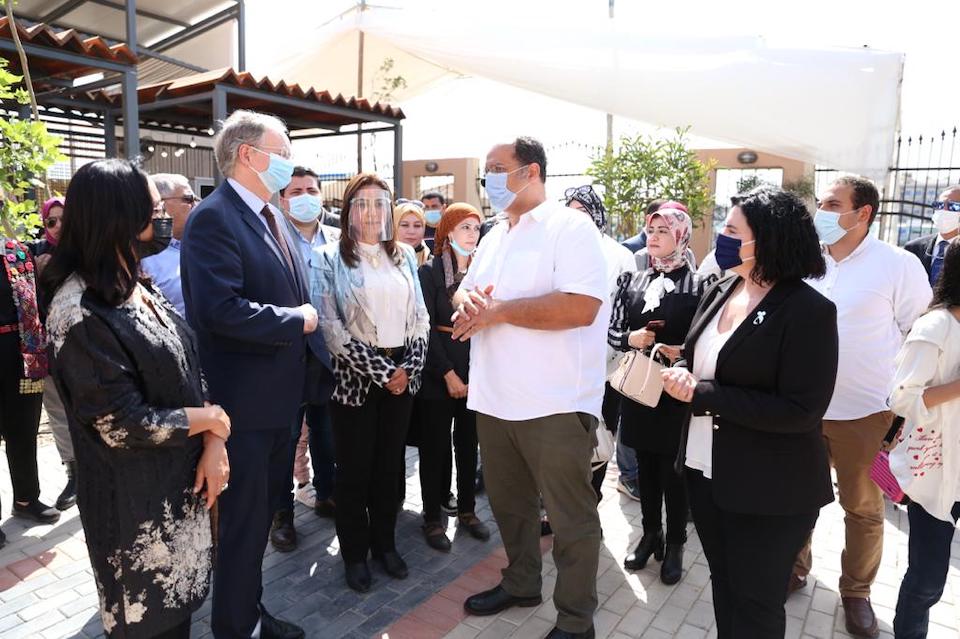 In her remarks, Dr. Manal Awad, Damietta Governor, applauded the upgrading of the area converting it into a women-friendly space that supports vulnerable women’s access to expanded social and economic opportunities.Dr. Awad added that this comes as part of the governorate’s strategy to develop informal and unsafe areas into accessible and empowering public spaces that facilitate equal access to opportunities.

“Consultation and confidence-building with the community are key to the success of the programme” stated Ms. Christine Arab, UN Women Country Representative, “public spaces need to be conscientiously and sustainably designed in partnership with the community and with the women in the community, and as part of an approach tailored to respond to the different needs and aspirations of the women and girls and men and boys who use them”.

H.E. Christian Berger, Ambassador of the European Union in Egypt and EU Gender Champion stated that ‘in the framework of the EU Gender Action Plan, the EU is committed to support all efforts to ensure a safe space free of violence against women and girls. When this is achieved, more opportunities will open up for women and girls, including work, education, and services. We are proud that the EU has been the first partner to support the ‘Safe Cities’ initiative in Egypt and that the Netherlands now supports it in Damietta. This is the true spirit of ‘Team Europe’ where the EU and its Member States join and complement efforts. Indeed, the efforts made by the Government of Egypt and our local partners in Damietta is a showcase of how to strengthen the role of women and girls in all public spheres’.

Even though sadly unable to be present, H.E Han-Maurits Schaapveld, Ambassador of the Kingdom of the Netherlands in Egypt and the EU Gender Champion expressed his happiness to be a part of the efforts supporting urban development that prioritizes women’s empowerment and safety. “In many countries, public spaces are male domains, leaving limited options for women to exercise their social and economic skills. Also, for mothers of children, safe child friendly areas are too often absent. With this new space developed, Damietta with its resourceful governor have set a model for other governorates, as well as communities to copy.”

Located approximately 15 kilometers northeast of Damietta and close to the newly opened Misr Public Library, the women-friendly space in Ezbet El Borg is designed to be an inclusive and accessible public area for community projects and a space for local women entrepreneurs to showcase their products and market them to the local community of Ezbet El Borg, and to the general public visiting the Misr Public Library, which the space surrounds. The space was designed based on a community needs assessment and through a participatory approach involving women and men from the local community, and the integration of the principles of gender equality and the empowerment of women. 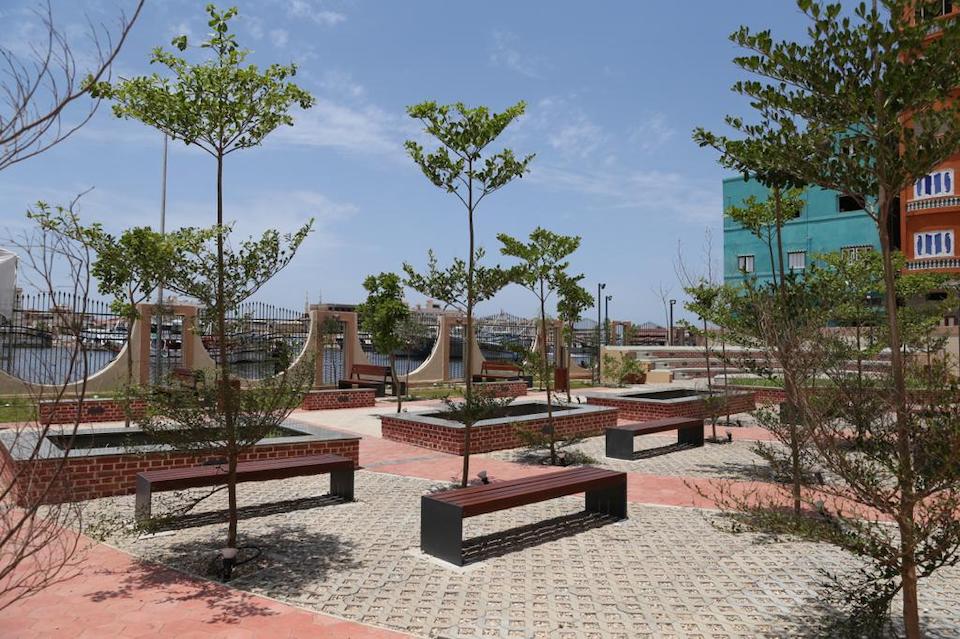 Beyond the physical improvements, the programme also included interventions to strengthen women’s skills and economic opportunities. Under the Safe Cities programme, the “Set El-Dar” initiative was launched. Through this initiative women from the local community of Ezbet El-Borg were trained on project design, product pricing, marketing, quality control and income generation, enabling them to run more successful businesses. This programme resulted in the establishment of multiple business projects between the beneficiaries.

Ezbet Elborg women-friendly space was created as part of UN Women’s global initiative, Safe Cities and Safe Public Spaces for Women and Girls which aims to ensure that women and girls are socially, economically, and politically empowered in public spaces that are free from sexual harassment and other forms of violence against women and girls. Egypt has been one of the founding countries for the programme since 2012 and the model has been rolled out in Alexandria, Damietta, Giza and Cairo in partnership with the National Council for Women to support implementation of the objectives of the National Strategy for the Empowerment of Egyptian Women 2030. This multi-stakeholder global initiative has grown to include 50 cities and continues to achieve positive results with its partners.

This space notonly serves the local community’s need for a public area, where women and girls are safe and have access to expanded social and economic opportunities but is also a platform for supporting transformative change by promoting respectful gender relationships in public spaces.

Related News
26/09/2021
Press Release: The Closing Conference of the “Safe Cities Free from Violence Against Women and Girls: Ending Violence Against Women Survivor-Centered Approach” Programme
09/12/2020
The Launch of an Awareness-raising Video on the Role of Companies and Businessowners in providing Safe Workplaces for Women within the 16 Days of Activism against Gender-Based Violence
02/06/2022
Joint Press Release: The Launch of a Series of Awareness-raising Videos on Ending Violence against Women and Girls
07/02/2022
National efforts continue to eliminate Female Genital Mutilation and reinforce a zero-tolerance culture
29/11/2021
Joint Press Release: Visit of Under-Secretary-General of the United Nations and UN Women Executive Director to Egypt– Lighting in Orange the National Museum of Egyptian Civilization to commemorate the 16 Days of Activism against Gender-based Violence
END_OF_DOCUMENT_TOKEN_TO_BE_REPLACED