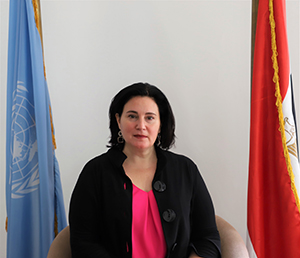 Christine Arab has worked on gender equality and women’s human rights in the UN System for over 20 years. Ms. Arab began her career with UN Women in 1998 in Jordan, and has worked in the Arab States, Asia and the Pacific, the Balkans, the Caucasus and the Caribbean.

Prior to her appointment in Egypt, Ms. Arab has twice served as UN Women Country Representative - with the UN Women Caribbean Multi-Country Office and the UN Women Albania Country Office. Ms. Arab was the UN Women Chief of the Asia-Pacific Section at HQ and served as an advisor on the UN Women Executive Director’s Transition team when UN Women was established. Ms. Arab has headed up UN Women (formerly UNIFEM) offices in the Southern Caucasus and Afghanistan and worked in the former sub-regional offices as a programme specialist for the Arab States, Central Europe and the Balkans, and Central Asia.

Ms. Arab has a Master of Arts in Political Science from Dalhousie University, Halifax, Canada.

“It’s simple, but it will make a difference” - A social media campaign to be launched by the National Council for Women and UN Women Egypt in line with the Climate Change Conference (COP27)
Under the Auspices of The National Project for The Development of The Egyptian Family, Ta7wisha Program Concludes with A Rowing Challenge
Within the framework of “Ta7wisha” programme: Launching the second edition of “Rowing the Nile Challenge” to let the community know more about “Ta7wisha” and raise environmental awareness
During his first visit to Egypt, the Minister of International Development of Canada meets with women entrepreneurs and job seekers from the ‘Rabeha’ programme
From where I stand: “My business aims to produce natural fertilizer for the soil to reduce harmful emissions “
END_OF_DOCUMENT_TOKEN_TO_BE_REPLACED