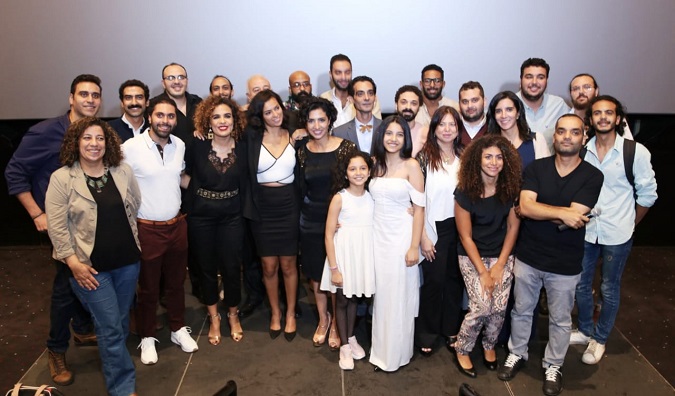 Group photo of “Between Two Seas” filmmakers. (Photo: Courtesy of the National Council for Women)

Cairo, 16 October 2019 – The premiere of “Between Two Seas” was held yesterday evening in the presence of Dr. Maya Morsy, President of the National Council for Women;  Ms. Gielan Elmessiri, UN Women Deputy Country Representative, and the filmmakers as well as a number of public figures. The film is the product of a joint collaboration between the National Council for Women, UN Women, Axeer and development partners.

In her speech after screening the film, Dr. Maya Morsy expressed her content for the release of this exceptional film. Dr. Morsy highlighted that the film received many awards but is awaiting the grand award from the public’s feedback. Dr. Morsy added that the film will be screened in all governorates in partnership with the Ministry of Culture and she thanked the filmmakers for their outstanding performance.

For her part, Ms. Gielan El-Messiri, UN Women Deputy Country Representative, emphasized the important role that art, specifically cinema, plays in highlighting issued related to women’s empowerment in a unique way that reaches the public and positively influence them. She thanked all filmmakers and partners for their efforts to release the film in a decent manner.

The story revolves around a short visit by Zahra to her town in a suburb of Cairo, where her daughter is exposed to a tragic accident, after which Zahra seeks to gain her daughter’s right and insists on completing her education and benefiting her community. The film highlights the various societal issues facing women, especially in rural areas.

Related News
03/03/2020
Art imitates life as FGM film screenings and group discussions begin
04/12/2019
The National Council for Women and UN Women Organize a Panel Discussion on “Between Two Seas” Film
14/10/2019
“Between Two Seas” in Cinemas this Wednesday
26/11/2018
UN Women Egypt Commemorates the Launch of 16 Days of Activism to End Gender-Based Violence
25/11/2018
Take Five: "In order to end violence against women, we need to work first on changing mindsets"
END_OF_DOCUMENT_TOKEN_TO_BE_REPLACED